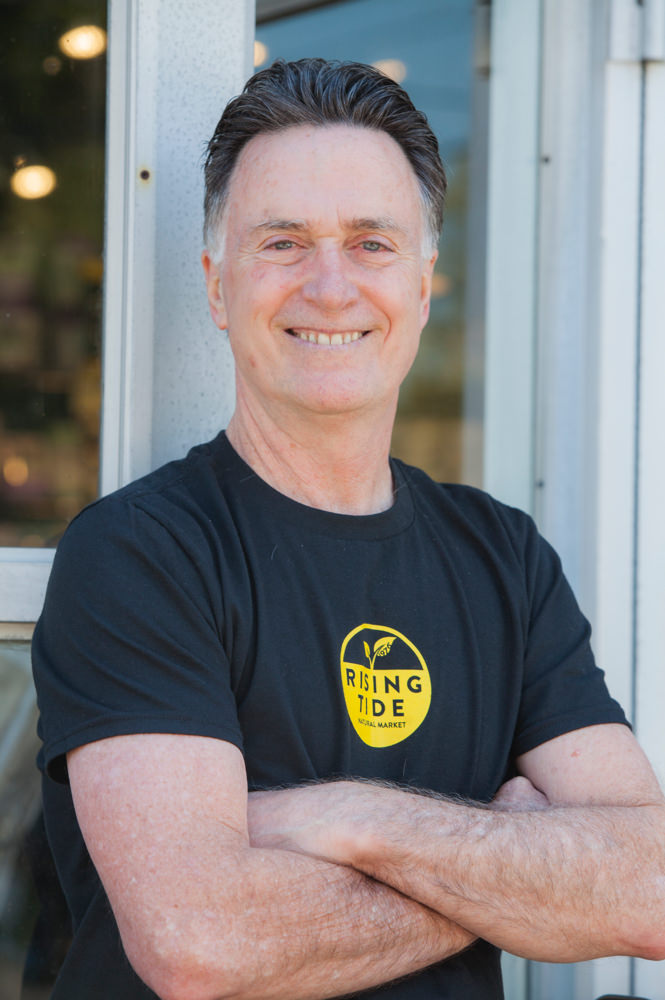 Expect to be welcomed personally by Jerry as you enter the store—he’s been greeting his customers, often by name, for nearly 40 years. In 1976, just in his 20s, Jerry founded Rising Tide Market with two partners, driven by an interest in macrobiotic food and a desire to advocate about healthy living. Today, he’s shifted focus to organic foods and sustainable living, but his desire to educate his community hasn’t waned. He loves the complex nature of owning RT, and how there is always something to improve upon. But his favorite part about coming into the store everyday is interacting with his customers, many of whom he considers friends.

When Jerry is not at RT, he connects with other independent natural food retailers working to provide a united voice in dealing with issues (GMOs, organic standards) that affect the whole industry. As a former high school track coach, Jerry is a devout follower of the sport, from the youth to the elite level. He has a son, Dylan, and a daughter, Lea—both RT employees. 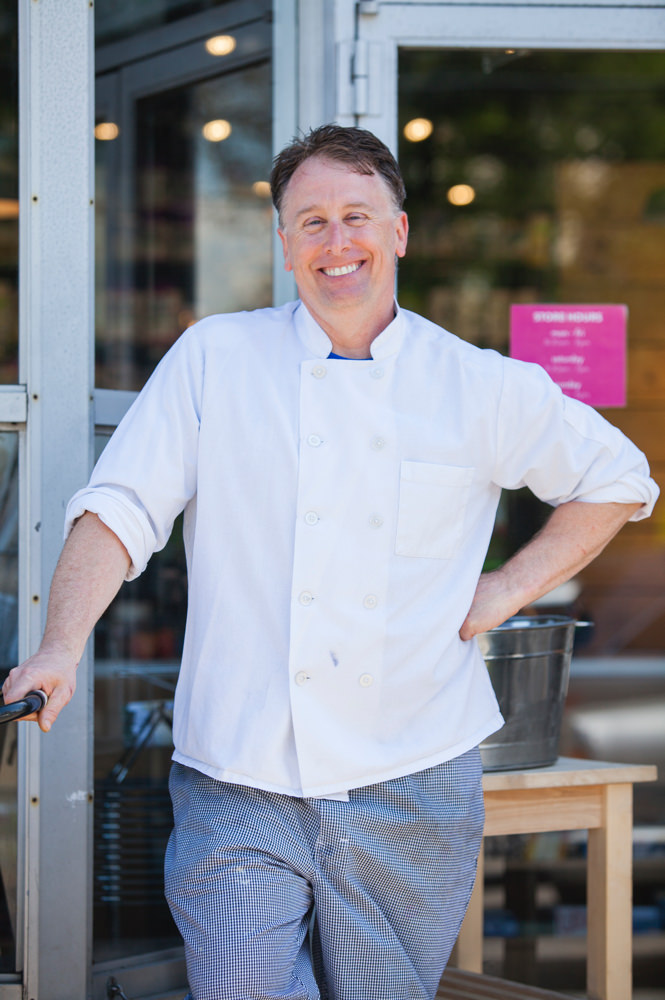 Armed with an associate degree in Culinary Arts and a Bachelor’s in Food Service Management from Johnson & Wales, John came aboard about a year ago at the request of his uncle (Owner and Founder, Jerry Farrell). The first thing he noticed was that everyone who works at RT is happy—a welcome change coming from the restaurant business, where he worked for 30 years. A natural foods aficionado, John loves to incorporate healthy new products when crafting menu items for the RT Kitchen (their family motto? “Let food be thy medicine and medicine be thy food”). Outside of RT, family life for John, his wife Christine and three children revolves around lacrosse and college level baseball. 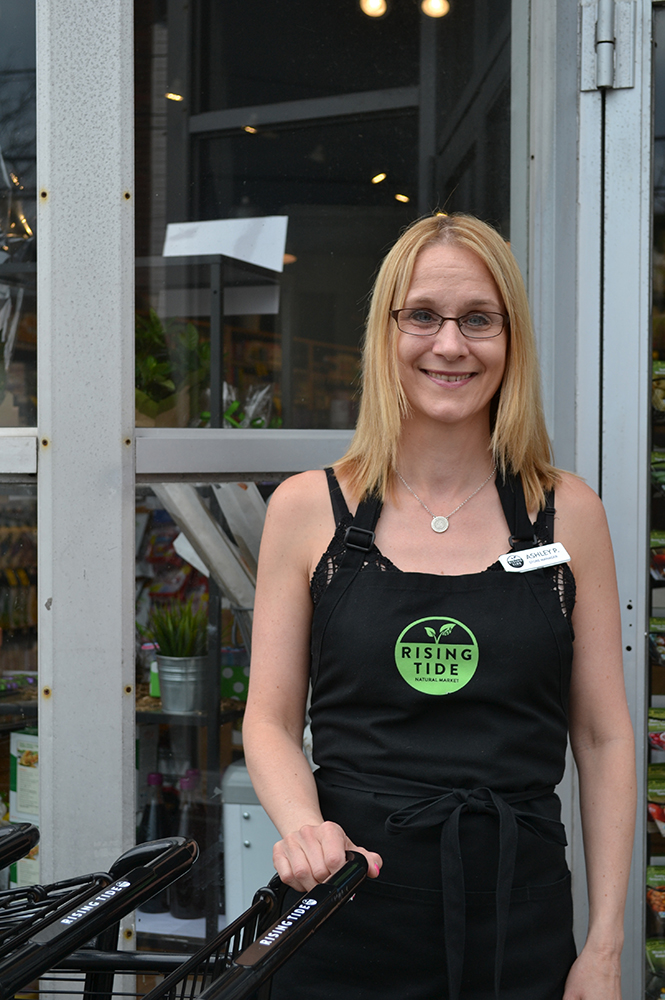 In 2013, Ashley came to RT to organize Jerry’s office. Before she knew it, they were planning a full scale store renovation. Having battled an illness in her 20s, Ashley turned to nourishing, healthy foods to support her body, and never looked back. She loves that there is always something new to keep her busy at RT: new food service ideas, new products, new trends to dive into. But what she loves most is the staff—she laughs harder with the RT staff than with anyone else. When not at the store, Ashley loves being in NYC, traveling (especially to Europe), and hanging with her nephew and two gorgeous dogs. 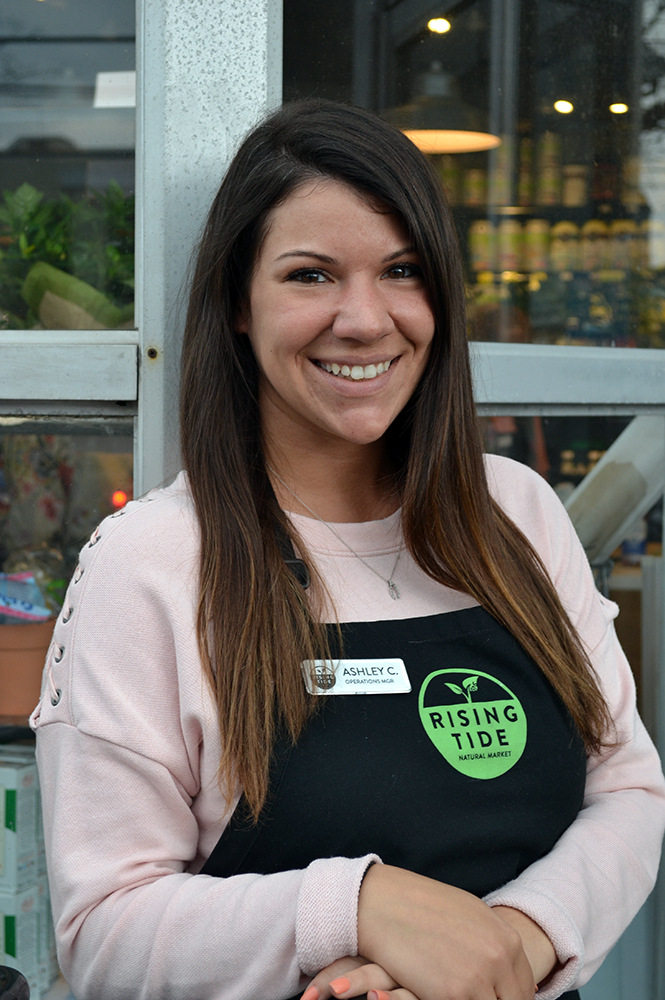 Warm, sunny with a passion for helping others, Ashley began her RT career as a cashier when she was just 16 years old. For the next eight years, she learned all the ins and outs of the store, to the point where she can practically run it herself (and does, as RT’s Store Manager). Ashley attributes her high energy and positive vibes to her natural lifestyle.  Ashley’s relationships with RT customers and staff members make Rising Tide feel like her second family. 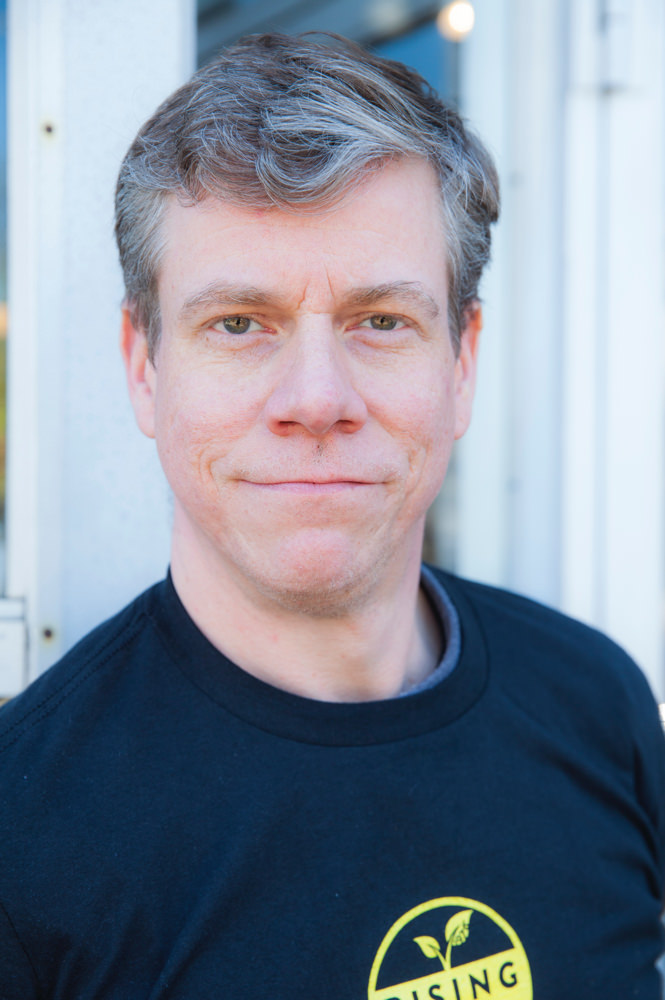 Bill was working in produce by age 18, and a manager by 20. After years in the corporate side of the grocery biz, he is happy to get back to a family-owned business like RT. His passion for organics is all about TASTE. The first time he ate a fresh, ripe organic tomato he was blown away, and he has been hooked on organics ever since—the perfect man to stock RT’s 100% organic produce department! A self-proclaimed “tech head”, he can often be found on a computer or spending time with his daughter. 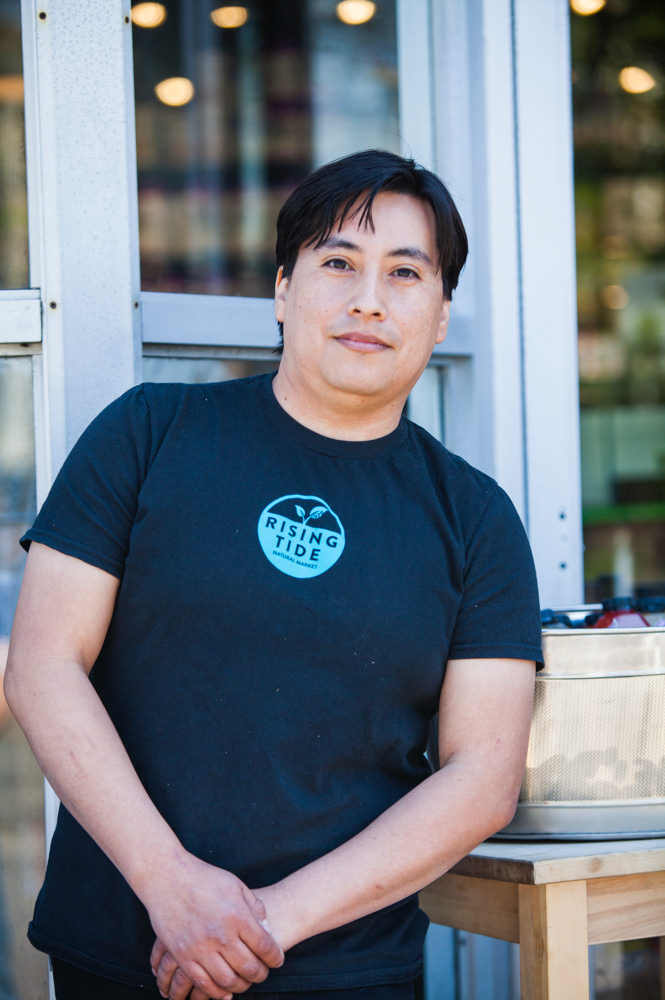 A friend referred Jesus to RT in 2000, and he has been a fixture here ever since. A love of good, natural foods, a nice work environment and great customers have kept him happy all these many years. A huge sports fan, you can often find Jesus watching his favorite teams on TV—Manchester United soccer and the Atlanta Braves, who he’s followed since his days as a child in Peru. 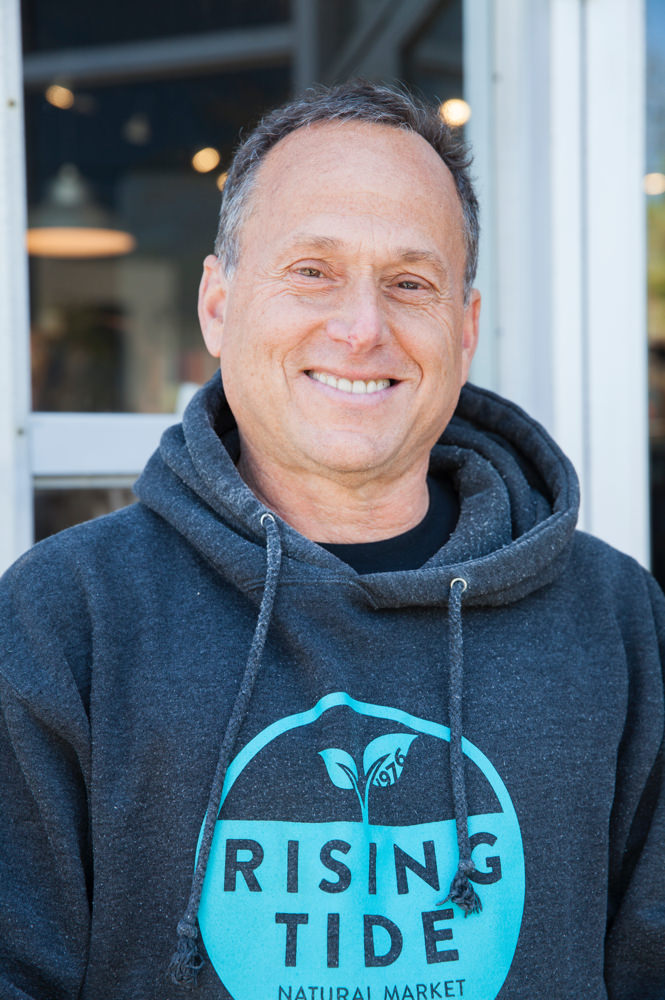 A daily customer since moving to Sea Cliff in 1997, Steve finally joined forces with RT in 2003. Today, he is integral in the maintenance of RT’s comprehensive supplement department. A high school track coach for 20 years, an avid runner and lover of the outdoors, Steve is happy to share what he knows with the community and work alongside the awesome RT team. 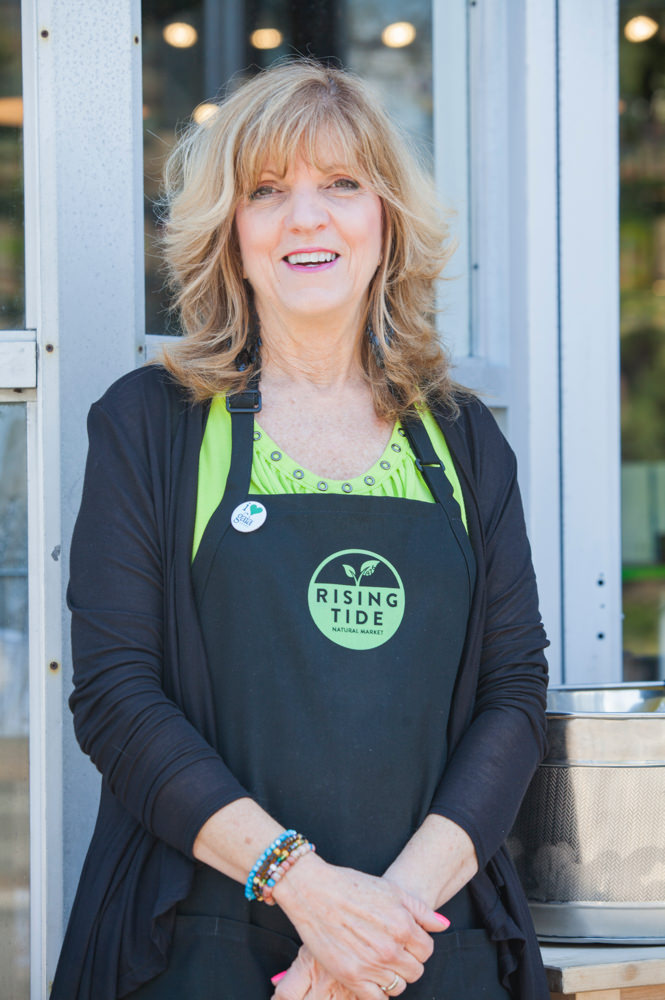 Among the faces you’ll see on any visit to RT, Lillian began her Rising Tide career back in 1986, happy to be part of a local business surrounded by interesting people. In true RT fashion, she loves to cook, garden and bake with organic ingredients. When she’s not at work, Lillian enjoys movies and spending time with her kids and her two beautiful Oci cats, Meka & Zoey.